For every design you purchase,

we cover the cost of a girl going to school for three days.

Our Mission
Now reading: Nobel Prize Day 2020: A Look Into Our Favorite Winning Women of Years Past
PrevNext

Each year, the Nobel Prize committee awards individuals who have done the most work to benefit humankind. Since 1901, 58 women have been a recipient of these awards. As these are prestigious indicators of courage, goodwill, and peace - recognizing figures who inspire our own Marcella team - we’d like to share some of our favorite Nobel Prize-winning women from years past. Their words continue to fuel our drive to create a world where women are in every picture, every boardroom, and every conversation. 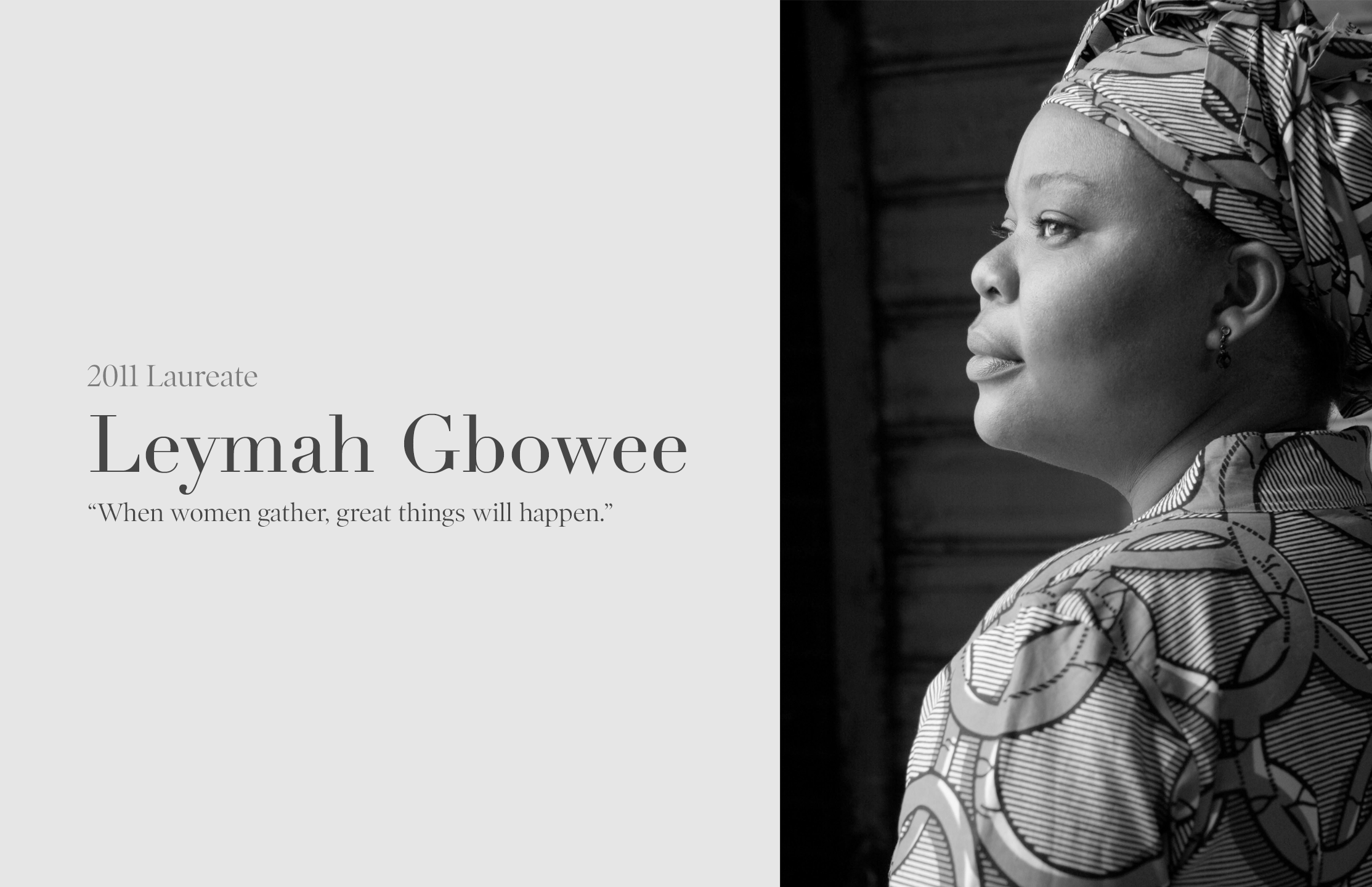 In 2003, Gbowee played a pivotal role in ending a fourteen-year civil war in Liberia. She mobilized both Christian and Muslim women for nonviolent protest and went on to form the Women of Liberia Mass Action for Peace. Through its collective efforts, this organization forced Liberia’s President to the table to negotiate peace agreements that would end Liberia’s civil war. After weeks of nonviolent protest, Gbowee’s persistence caused that President to resign and a peace treaty to be concluded.

After helping to end the civil war in Liberia, Gbowee continued to do work that would play an integral part in advancing the lives of women everywhere. In 2012, she founded the Gbowee Peace Foundation Africa (GPFA). This organization provides educational and leadership development opportunities for women, girls and youth. GPFA seeks to address inequality and build sustainable peace by mobilizing resources to support grassroots organizations that increase access to education. 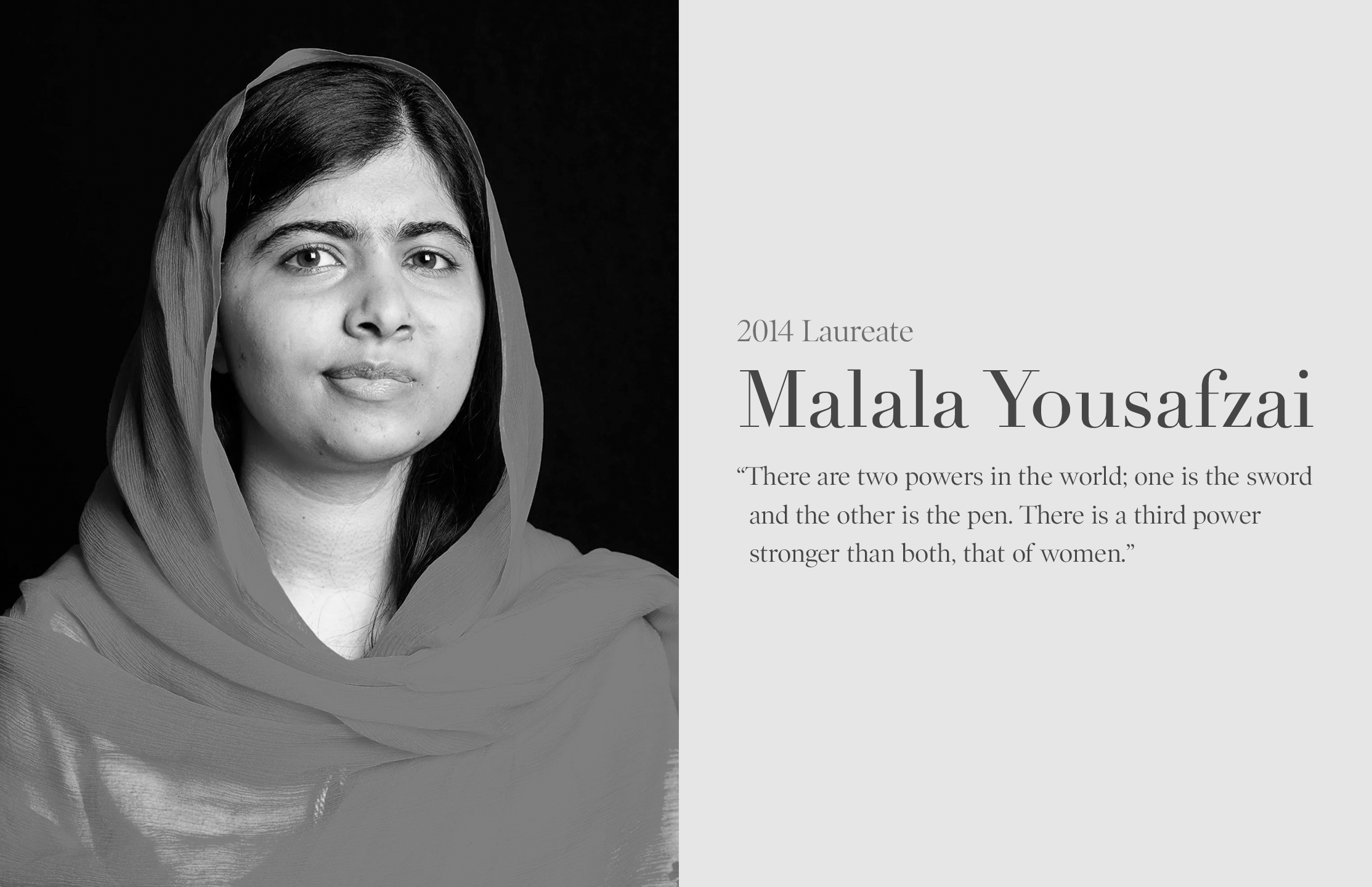 Malala Yousafzai
2014 Peace Prize
"For the struggle against the suppression of children and young people, and for the right of all children to education."

When the Taliban took over her village in the Swat Valley of Pakistan in 2009, they eventually destroyed over 400 schools. At only eleven years old, Malala began anonymously blogging for the BBC about her life under Taliban rule. Girls were not allowed to attend school under the Taliban, which Malala took personally as a lover of knowledge. Shortly thereafter, she began publicly advocating for girls’ right to education. This made her a target and she was the victim of a violent attack in Pakistan that put her in the hospital at age fifteen. After months of recovery and rehabilitation, Malala would go on to publish her autobiography and launch her charity, the Malala Fund. Through the Malala Fund, she continues to advocate for quality education for all girls by funding education projects and empowering young women globally. 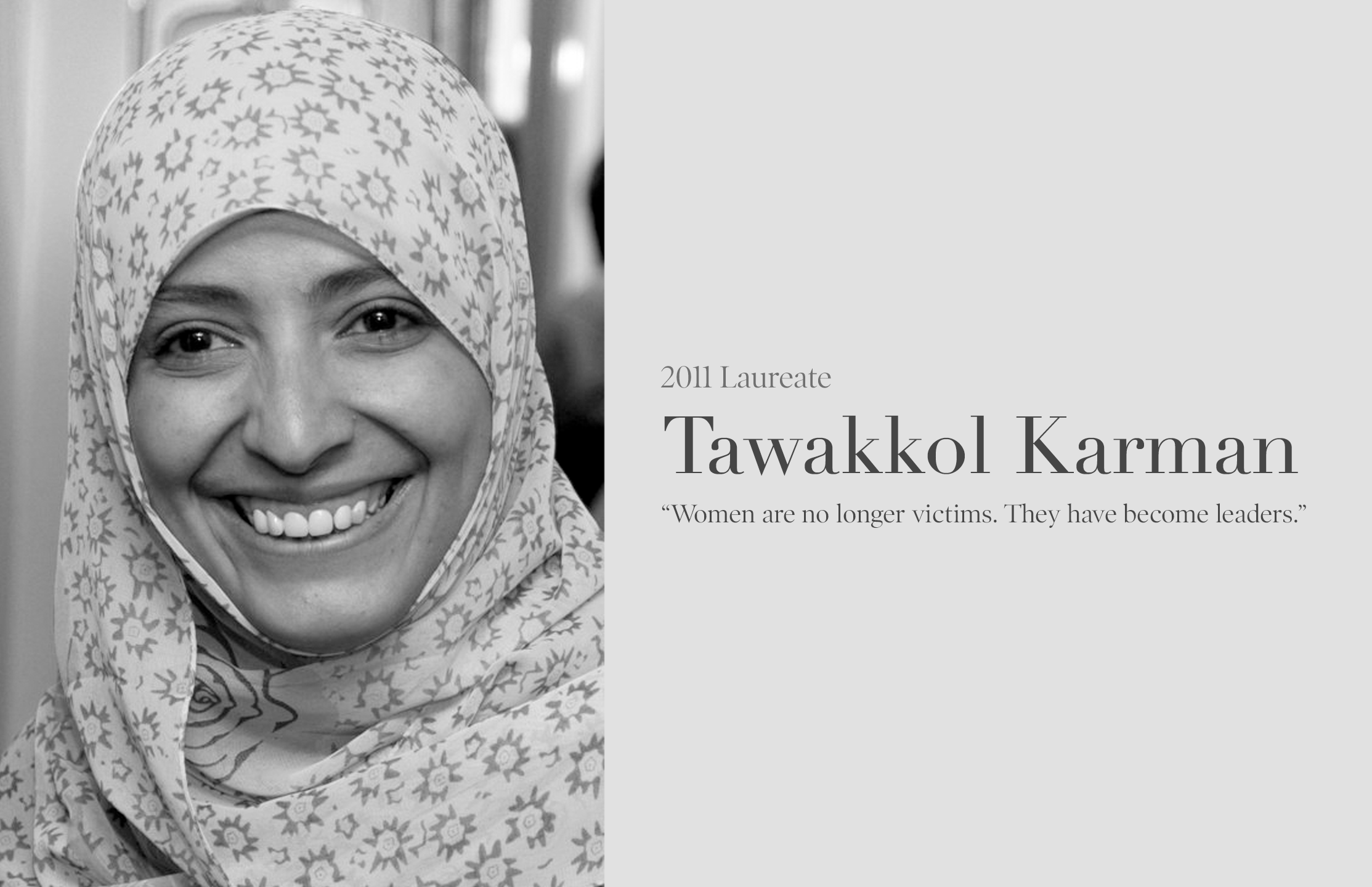 Tawakkol Karman
2011 Peace Prize
“For the non-violent struggle for the safety of women and for women's rights to full participation in peace-building work."

Tawakkol began a career in journalism after she graduated college, which was when she began to face retaliation from the Yemini government. In 2005, she and her colleagues founded the organization “Women Journalists Without Chains” to advocate for women’s and civil rights, along with freedom of expression. Using her organizing capabilities, Tawakkol led numerous non-violent protests that ended 32 years of corrupt and authoritarian ruling in Yemen under president Ali Saleh. Since starting in 2005, she has led more than 100 peaceful demonstrations, sit-ins and solidarity events to protest judicial and governmental interference with press freedom and journalism. 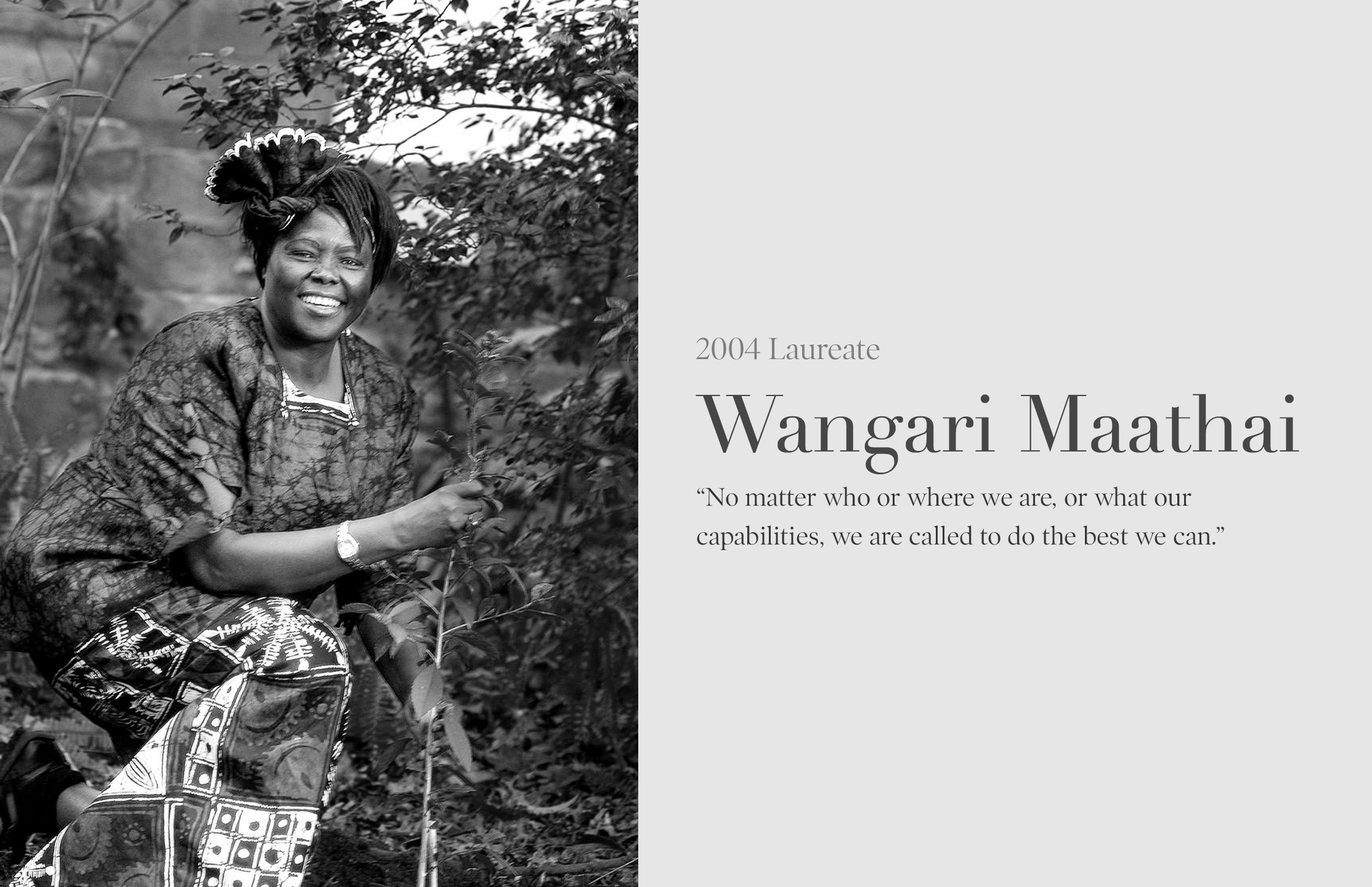 Wangari Maathai
2004 Laureate
"For her contribution to sustainable development, democracy and peace."

Wangari began her journey with an impressive academic background. She was the first woman in East and Central Africa to earn a doctorate degree, and the first woman to be an associate professor in her region (at the University College of Nairobi). In 1977, Wangari then founded the Green Belt Movement in Kenya, which mobilized women to plant trees to combat deforestation and desertification. By the early 2000s, over 30 million trees had been planted as a result of this movement. After serving in its National Assembly in 2002, she was elected Kenya’s Assistant Minister of Environment, Natural Resources, and Wildlife in 2003. Tragically, Wangari died in 2011 from ovarian cancer, but her legacy lives on as someone who embraced democracy and women’s rights.

Whether you’re as eager as we are to learn of who the new Nobel laureates are or you just love hearing about strong women shaping the world, don’t ever doubt the power we have inside of us! As we all enter into the new year together, let’s continue to share each other’s stories and lift up one another - a prospect (demonstrated by the wonderful women above…) that can only help make this world a better place for everyone.

"Less Is More" - How and Why to Build a Minimalist Wardrobe

What’s Keeping Us Warm This Holiday Season: A Q&A From Your Marcella Team